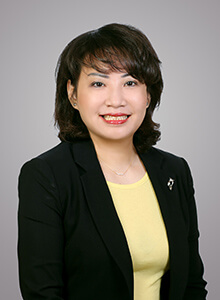 Peggy Tsai, RFP, CCFP is the Secretary of the MDRT Executive Committee. She is an 18-year MDRT member with eight Court of the Table and three Top of the Table qualifications. She is also a Silver Knight of the MDRT Foundation. Tsai, an advisor with Shin Kong Life Insurance Co., began her career in financial services in 1993. She has won the award for No. 1 sales achievement in her company for seven consecutive years. Tsai has held numerous volunteer leadership positions for MDRT, currently serving as Chair of the Global Conference ConneXion Zone Committee. In 2018, she served as Divisional Vice President of Membership Communications Committee (MCC) Division 2. Other highlighted MDRT roles include service as MCC Region Chair for Greater China and MCC Zone Chair for Taiwan. Tsai has also volunteered in several capacities for MDRT’s meetings, and she has presented at the MDRT Annual Meeting. In addition to her MDRT involvement, Tsai has spoken to numerous audiences of financial professionals in China and has contributed to industry publications in her region.